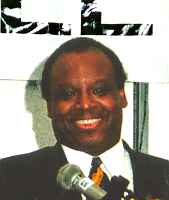 Jessie grew up in Flint on St. John St. and Campau. He attended Fairview Elementary, Lowell Jr. High and graduated from Flint Central in 1968. After graduation he attended Central Michigan University, where he excelled in football.

In football, Jessie anchored the back field as a fullback and on the defense he played end.

Wrestling was another sport where Jessie excelled, and at 165 pounds he climaxed his high school wrestling career with a fourth place in the state. As a junior he was state runner up and voted MPV by his teammates. Dean Ludwig, who coached Jessie for three years in wrestling, listed him as one of the toughest competitors he ever coached. “One of the finest gentlemen I have ever met and if I had a son, I would want him to be like Jessie.”

At Central Michigan University coach Roy Kramer described Jessie as a great young man to coach. He had the ability to make the big play…to get that extra yard when needed. It was almost impossible to tackle Jessie one on one because of his tremendous upper leg strength, his quickness and his determination.

Because of Jessie’s greatness and his hard work ethics, he was tagged with the name “Great Lakes.”

With “Great Lakes” leading the way, the Chippewas never had a losing season in the three years Jessie was on the varsity squad. He was the first Michigan collegiate football player officially to rush for more than 3,000 yards. He ran 39 times for 343 yards, scored five touchdowns breaking Jim Podoley’s record in one afternoon.

Jessie was inducted into Central Michigan University’s Athletic Hall of Fame in 1988.