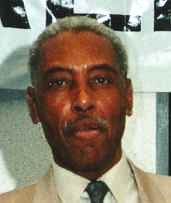 John grew up on the north side of Flint, where he attended Jefferson, Fairview, Roosevelt and Clark Elementary Schools. He attended Emerson Jr. High and graduated from Flint Northern, Genesee Community College and attended Eastern Michigan University.

While at Flint Northern, John was the leading scorer on the basketball team. He was All Saginaw Valley First Team, named to two All State First Teams, and voted MVP by his teammates.

In 1972, he was selected to the Outstanding College Athlete Hall of Fame.

John makes his home in Flint.