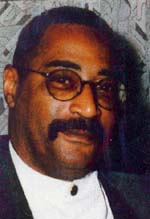 LeRoy was raised on the north side of Flint and attended Jefferson Elementary, Emerson Junior High, Flint Central, and graduated from Flint Northwestem.

As a child, LeRoy played sand lot ball at Oak Noll, Jefferson, Fairview and Berston…or anywhere he could pick up a game.

LeRoy excelled at athletics as a young person. Some say he excelled because of the neighborhood boys he played. Athletes such as John Summers and AfroAmerican Hall of Famers Mel Summers, Al Washington and Gene Summers.

LeRoy excelled in three sports, basketball, football and track. While at Flint Central in his junior year he averaged 10.5 points per game coming off the bench. In football with a season of 7 and 2, he caught 11 passes for 266 yards and scored five touchdowns from quarterback Tiny Laster.

Due to boundary changes during Blassingame’s senior year, he transferred to Flint Northwestern and was named Flint’s top Class A pass receiver and narrowly missed an All State berth in football.

In basketball he had the best scoring average among the four high schools. LeRoy scored 25 or more points four times, including the school record of 33 points. He was the second highest regular season scorer in the Flint city series scoring more than 200 points during the six regular season games. He scored 322 points in 16 games for a 20.1 average to spearhead the Wildcats to a 12 and 4 season. He missed the record by five points.

LeRoy was named his senior year to the 10 Man All State Team by the Associated Press, and was named honorary captain for the 1964-65 season, and the most valuable player by his teammates.

LeRoy was the first winner of the Earl Emery Award and received the Optimist Scholarship Citizenship and Athletic Award his senior year. After high school LeRoy played on a team at Flint Junior College with Ed Carr, John Summers, Monroe Dent and Justus Thigpen. He was unable to complete the season because he was drafted into the Armed Forces.

LeRoy and his family reside in Flint.