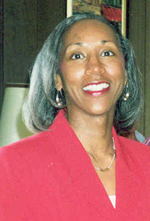 Jackie was a member of the Flint Northern track and volleyball teams. In the champion of champions meet at Lakeville, Jackie set a record in the 440 yard dash with a time of 1 :00.4. She ran a 14:9 in the 110 high hurdles which was 30 yards longer than the former girls distance.

In her senior year she held three records in the 440. Jackie ran on the 1976 regional mild championship relay team along with Onrea Green, Tekilla Williams and Betty Townsend. Also in 1976 she won the regional 110 high hurdles with a time of 15.1, which qualified her for the state meet. Jackie was also a member of the state championship mile relay team.

In volleyball, Jackie played on Northern’s fIrst volleyball team under coach Judy Zylstra. She was named captain of the volleyball team and Coach Johnson said she was one of the best athletes on the team. In her senior year Jackie helped lead the Lady Vikings to a 15-0 undefeated season, winning the city and Saginaw Valley championship.

Jackie won a scholarship to the University of Michigan to play volleyball under Coach Sandy Vong. While there she earned letters in 1977, 1978, 1979 and 1980.

Jackie resides in Richmond, Virginia, where she and her husband are in the ministry.