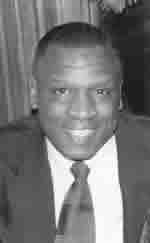 Joe Jr. grew up on the north side of Flint and went to Dewey, Martin, Pierson and Garfield Elementary, Emerson Junior High, Hamady Junior High and Hamady Senior High.

Joe’s athletic ability came natural. His father was a professional boxer and the fIrst African-American to coach the u.S. Olympic Team from the State of Michigan.
Joe always wanted to attend Flint Northern High, however, his family moved to the Hamady school district.

While at Hamady Joe played varsity in three sports. As a football player he scored two touchdowns against Mt. Morris, gaining 811 yards rushing in 27 attempts for a 6.2 average. In one game Joe scored four touchdowns and caught five passes for 155 yards and was a standout on the Hawks defense and kick off returns.In basketball, Joe scored 23 points to spark Hamady to its fIrst triumph in five games and led the Hawks on the backboards with 16 rebounds.

Joe set a school record in the broad jump with a leap of 22 feet and 1 inch, a record that stood for 22 years.

June 18, 1981, Joe made his pro boxing appearance at Ballenger Field House. His pro boxing record was 16 wins and five losses with 13 knockouts.

Joe lives in Flint with his family and works for GM. Most of his spare time is spent as a sparring partner for his younger brother Chris who is now the Heavyweight Boxing Champion.

Tonight, Joe Jr. joins his father and his sister, Lorrie, who are Hall of Fame Inductees.