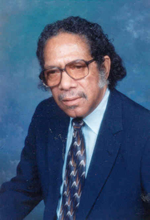 Sherridale was born in Flint, Michigan and grew up on the south side, where he attended Clark Elementary, Whittier Junior High and Flint Central High School.

Sherridale’s boxing career began 55 years ago when Sherridale was chased home from school by a group of bullies. His father sternly told him to stand up for himself. Sherridale turned to boxing and it soon became obvious that boxing was made for him.

Within five years of boxing, Sherridale won the Michigan AAU State Championship in back to back years and qualified for the 1955 Pan American boxing team.

Sherridale joined the Anny and won six Anny championships and the Oregon and Seattle AAU titles.
After retiring from competition, Sherridale became the trainer of the Anny team for eight years serving as head coach from 1972-1974.

Before retiring from the Anny, a delegation from the city of Wilmington, N.C. who saw his teams compete at Camp Lejeune, recruited Sherridaleto run anew center in Wilmington.

He has spent his entire career helping children become productive citizens in life. On November 19, 2002, during a regular monthly meeting, Wilmington Mayor Pro Tem Katherine Moore read a resolution that the boxing and physical fitness center be renamed the Sherridale Morgan Boxing and Physical Fitness Center.

Sherridale resides in Wilmington where he continues to run the boxing program.