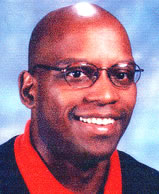 Gary grew up on Flint’s north side and attended Jefferson Elementary, Bryant and Holmes Junior High, and graduated from Northwestern. After graduation, Gary received a scholarship to Albion College after turning down an offer from Michigan State.

While attending Northwestern, Gary was one of the schools best all around athletes. He lettered in football, basketball, baseball and ran on the track team. Football, however, was his best sport. In 1976, during his first year at Albion, Gary was the National qualifier for the long jump. In 1977, he was All MIAA triple jump and long jump. All MIAA 200 meter dash and 4 x 100 relay.

After graduating from college, Gary joined the coaching ranks and landed a job coaching in Texas. Today Gary is one of Texas’s top high school basketball coaches. During his 12 years as coach at Willowridge High School, Gary earned quite a reputation for building a great program. Gary has moved on to a newer high school, Thurgood Marshall.

He has coached in the prestigious McDonald High School All American game.

Gary says his success is a direct reflection of how he was raised by his mother and father. “They taught me to take pride in whatever I do.”

Gary and his family live in Missouri City, Texas where he is still coaching and making a difference in young lives.