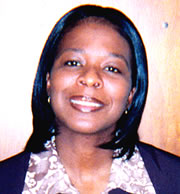 While at Flint Northern, Leteia started for Coach Dorothy Kukulka as a sophomore. Leteia never played in a loosing game, nor missed playing in a varsity game in her high school career. Teamed with the McGee twins and Judy Tucker, Leteia had a record of 26-0 her senior year and a 48-0 for the previous two seasons. She played on six state championship teams at Flint Northern, three in basketball and three in track and field. She never lost a track meet and was named captain of the
track team.

Leteia was second team All Valley in basketball her sophomore year and named to the Saginaw Valley first team her junior and senior years. Against Detroit Murray, Leteia gave one of the most memorable performances in Flint Prep. history by scoring 37 points in a single game. She led Northern in scoring and rebounding her senior year with an average of 14.8 points and 9.4 re- bounds per game. Leteia was named student athlete of the year her senior year and was the most highly recruited player in the state, making her one of the best all around female athletes to graduate from Flint Northern.

At the University of Washington, Leteia was an All American candidate as guard her senior year. Leteia led the Washington Huskies in scoring, assists, steals and blocked shots.

Leteia is now the head coach of her former high school..Flint Northern girl’s basketball team. In the 2002 basketball season, Leteia joined the 200 win club since taking over Northern’s basketball program in 1993.

Leteia was the eleventh area coach to reach the 200 win plateau and the second city coach with an
overall record of 200-45 from 1993-2002. In the 2003 season she coached the lady Vikes to a 24-0 regular season and went on to win her District Regionals, Semi-finals and loosing in the finals with an overall record of 26-1 for the year.