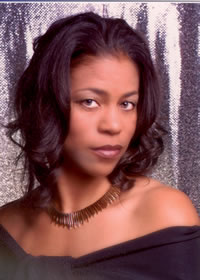 Tonya was the first female state champion hurdler from Flint Northern. Tonya’s speed not only made her an All State hurdler but a key member on the relay teams. She ran the anchor leg in the mile relay team along with Paula and Pam McGee and Levy String. Tonya was a state champion in
the 110 yard and 220 yard hurdles in 1980. At the Midwest meet of champions Tonya won the 100
meter low hurdles with a time of 13.9 and ran on the winning 880 medley relay team with a time of 1:43.7. In the Greater Flint Track and Field Invitational Meet, Tonya broke her own record in the 200 meter hurdles with a time of 28.5, after erasing the 100 meet hurdle record with a clocking of 14.1. She ran the lead off leg in the 880 meter relay which won in a record time of 1:42.3. At the 1980 Mott relays Tonya ran on winning teams in the Mott 11/2 mile relay, the shuttle hurdle relay, the 440 relay and runner-up on the 880 relay team. That shuttle relay team included, Edyth Childress, Leteia Hughley and Judy Tucker, lowering the record to 1:00.0.

Tonya ran in the United States Olympic track and field trials from June 16-24, 1984. Her Olympic trials time in the hurdles of 13.35 was in the top six…just missing the mark to make the Olympic team.

Tonya, a practicing pharmacist, and her family reside in Charlotte, North Carolina, where she owns a successful pharmacy business.