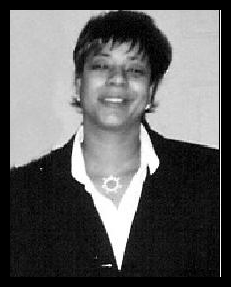 Shelly Sparks began school in the Flint School District at Scott Elementary on Flint’s South side. Afterwards, her family moved to the Beecher School District where she attended Dolan Junior High and graduated from Beecher High School.

After graduation, Shelly entered Southern University at Baton Rouge, Louisiana where she excelled in basketball.

When Shelly started playing basketball, there weren’t many girl’s teams around, so she played basketball with the boys. The experience she gained playing with the boys would prove to be an asset to her in later years.

At Beecher, Shelly played on the Girl’s Varsity Basketball Team under Coach Dave Hollingsworth where she was called the unquestionable top player in Beecher’s girls basketball history. She scored 13.26 career points, average, 18.9 in scoring and 10.3 average in rebounds. She was also named three times to Michigan Class B All State First Team at guard position. She earned three unanimous selections to the All Big Nine first team, after guiding the Buccaneers to their third straight conference title and Class B Championship. “It will be a long time before another Shelly Sparks comes through here,” said coach Hollingsworth. Shelly had offers from 22 colleges including the University of Michigan, Wisconsin, North Carolina State, and Maryland.

Shelly accepted a scholarship to Southern University, Baton Rouge. At Southern, she started on the girl’s basketball team and in her senior year (1984-1985 season) she made the All SWAC Second Team.

Shelly now lives in Houston, Texas. Congratulations! You have made Flint proud of you.