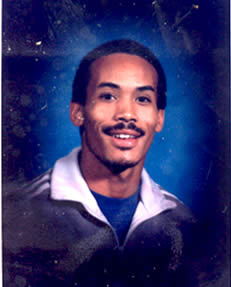 Michael grew up on Flint’s north side of Flint and attended Fairview and Garfield Elementary schools, Emerson Jr. High and graduated from Flint Northern High. Mike played football and ran track at Northern. Although Mike loved football, track was his best sport.

In football he made All City and All Valley and played varsity for three years. In track Mike was All State and All American. For three years he was state champion in the 100 and 220 yard dash and held the school record in the 100, 220 and 400 yard dashs. Mike raced to the regional 100 yard dash triumph with a 9.7 seconds clocking at Clio, Michigan. Coach Norb Badar votes Michael iller in the same breath with the world record holder in the 60 yard dash (5.8) Herb Washington.

Mike was voted captain of the University of Tennessee football team and made the All South Eastern Conference Team. He also made the U.S. track team in 1981 and 1982. Mike’s fastest time was 10 seconds flat in the 100 meters and 20.15 in the 200 meters.

In 1982 Mike was named one of the top five sprinters in the world in the 100 and 200 meters. He was drafted by the Green Bay Packers and later played for the New York Giants, Cleveland Browns and the New Orleans Saints.

In addition to the NFL, Mike tried out for the Canadian Football League. Mike and his family lives in Mansfield, Ohio.

Mike you have made Flint proud, this is truly your night.