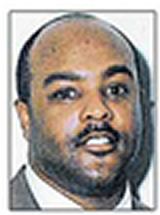 Don was a rare athlete who excelled in multiple sports. He was captain of his baseball and football teams.

In baseball, he made All Valley, All City and played varsity for three years. His batting average was .423. He was on Coach Bill Adams top Flint Northern player list.

Don also excelled in football at Albion College, halping the team to an undefeated and MIAA championship in 1976-1977.

After graduation, Don returned to his alma mater, Flint Northern, in various coaching capacities. Under his guidance as track coach, he won city, regional and placing in the state finals.

Don resides in Flint and is Assistant Principal at Saginaw High School.