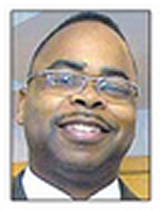 Rodney Feaster grew up in Flint and attended Parkland and Stewart Elementary. He also attended Whittier Junior High and graduated from Flint Southwestern. Rodney displayed his athletic powers and skills and an early age. He was a three year letterman in football and track and a two year letterman in basketball.

In track, Rodney participated in the 100 and 200 meter sprints, 400 and 800 meter relys earning City and Saginaw Valley championships in these events and conference records were set in these events.

Rodney earned All American honors in track and earned the Academic and Athletic Award from the Downtown Optimist Club in 1977.

He won a football scholarship to the University of Michigan, where he also participated in track. While at U of M, Rodney started at wide receiver from 1977-1979 and played on three consecutive Big 10 Conference Championships and also played in three Rose Bowl games (1978-1980).

Rodney was a three year letterman at U of M in football and participated on the men’s track team from 1978-1980. As a letterman in the 800 meter relay, he won first place in the Big 10 Outdoor Championships in 1980, setting an outdoor record in the meet.

Dr. Feaster is a successful dentist and a valuable asset to the Flint community.