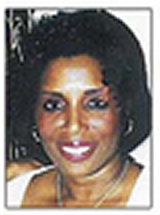 Jean was born in Erie, Pennsylvania and moved to Flint at the age of two, and grew up on Flint’s north side. She attended Jefferson and Garfield Elementary schools, Emerson Junior High and graduated from Flint Northern High School.

When Jean was in high school, girls did not compete in any type of competitive sports. As her older brothers wer playing sports for Flint Northern, Jean decided to run track for the Flint Track Club under coach Dwight Johnson.

Jean and her brother Willie both trained for the 1972 Olympic games held in Munich, Germany. Jean also had the pleasure of working with Jesse Owens twice while she was at Texas Southern University.

In 1975-1977 Jean was one of the assistant track coaches in the Houston school district and taught physical education for the Houston Independent school district. Jean also officiated over track meets, summer games and coached other sports activities for 25 years.

Jean lives in Missouri, Texas and stays active working with children in her city.