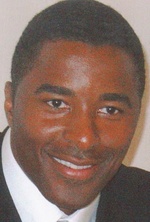 Barry Stevens was born to be a leader and play basketball. He touched the lives of thousands with his kindness and charisma on and off the basketball court. It was not unusual for Barry to hold long conversations encouraging unyielding trust in God.

Barry, one of six children, was born November 7, 1963, in Flint, Michigan. He received a Bachelor of Science degree from Iowa State University.

His basketball career reads like a who’s who. His fast pace, smooth long range shooting style, speed and exciting up-tempo offense were key in turning a dormant basketball program into an annual NCAA Tournament contender.

Barry is the only Cyclone in school history to record two 40 point games. He was First Team All Big Eight, 1984-85. His accomplishments also include CBA All Star Team, three point champion in 1990, and CBA Coach of the Month in March 2002. Barry was inducted into Iowa State Athletics Hall of Fame in 2004.

Barry was selected in the second round of the 1985 NBA Draft by the Denver Nuggets and played professional basketball for 10 years. He played in such locations as Europe, South America and the Philippines.

He was the husband to Sarita and the father of three gifted children who are athletes and scholars in their own right.