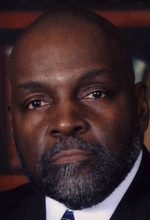 Donnie was Northwestern’s most outstanding lineman. His defensive team, also led by Terry Harris and Randy Johnson, held their opponents to 4.9 points per game. That same defense often harassed foes into fumbles and quick passes which prompted interceptions. Coach Dave Brines called McGhee his biggest Wildcat and did a job equal to his size.

He called defensive signals for the defense, which scored five shutouts. Donnie also did double duty on offense. Donnie was named defensive captain of Northwestern’s football team and was chosen by the Detroit Free Press high school All State Football Team.

Donnie was named to Scholastic Magazine’s 95-member All American Football Team in 1965, and was the winner of the Flint Optimist Club Award for Leadership, Citizenship and Scholarship in combination with athletic ability.

Donnie received a football scholarship from the University of Nebraska and played on the 1970 National Championship team under Coach Bob Devaney.

Donnie remembers President Nixon holding a press conference at the University and the team had the chance to show off their rings.

Donnie is a Senior Staff Administrator at Honda of America. He and his family reside in Urbana, Ohio.