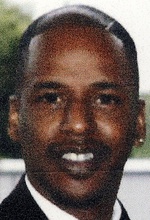 Eric was raised on the south side of Flint. He attended Scott Elementary, Whittier Jr. High and graduated from Flint Central High School.

Eric went on to play basketball at the Univeristy of Michigan and was drafted by the Detroit Pistons. Eric’s father, Clif Turner, was a great basketball player and coach in his time. This of course helped Eric to hone his basketball skills. Eric played three years as a starter on Central’s varsity team. Coach Stan Gooch charged Eric with quarterbacking the Flint Central offense as a point guard.

Eric was named to the McDonald’s All-American Team his senior year. He averaged 20.9 points and 8.9 assists. He was runner-up to Sam Vincent for the 1981 Michigan High School Mr. Basketball. According to the Flint Summer Pro-Am coach, “Eric Turner was something to see. He could pass the ball, shoot the ball, handle the ball and do just about anything.”

Eric was first team All-American in high school and started for Michigan his freshman year. At Michigan, Eric was the 1983-84 team captain with a record of 24-9 overall, 11-7 and second place in the Big Ten, and a NIT championship. He is listed in Michigan’s record book in several categories. He is number 23 on Michigan’s all-time scoring list with a total of 1,251 points.

Eric was in the 1984 draft and was drafted by the Detroit Pistons number eight in the second round.

Eric is a Sales Coordinator and resides in Flint.