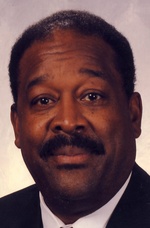 Ricky was a two sport star at Flint Southwestern – football and basketball. Normally, players south of the border (Ohio) are anxious to cross the border and come to Michigan to play. Ricky did the reverse and honed his collegiate skills at Miami of Ohio.

In high school, he was All Valley in football and basketball at Southwestern in 1971-72, Honorable Mention All State in football, 1971-72, co-captain basketball 1971-72, and All-MAC Tight End in 1975. He received the Most Outstanding Lineman Award in 1975. Ricky attended the Baltimore Colts Training Camp in 1976.

Ricky played on three consecutive MAC championship teams for Miami University, Ohio from 1973-75. He made three Tangerine Bowls on nationally ranked teams with a school record of 32-1-1, the best consecutive record in school history.

Ricky has three younger brothers that also made significant contributions to the MAC Conference in football.

Ricky is an assistant principal with the Southfield Public Schools. He and his wife, Joyce, have two children and six grandchildren. They reside in Southfield, Michigan.