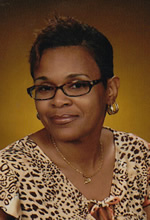 Lena grew up on the north side of Flint and attended Dailey Elementary, and Doland, Kennedy and Emerson Junior High Schools. She graduated from Flint Northern.

Lena was called Ms. 300. She has rolled more perfect games than any other woman in area annuals. She was inducted into the Bowling Hall of Fame in 2000.

Lena was the 42nd woman enshrined as a Hall of Famer at the top of the area women’s career 300 ladder with nine. She collected a perfect game at Colonial Lanes’ Morning Mixed Doubles League, which gave her a two game lead on the 300 list by stringing all twelve strikes. The 300 came between scores of 216 and 217.

Lena has been one of the area’s dominant bowlers throughout much of her 28-year career that began in high school at Flint Northern. She boasts a career high series of 803 and has a high average of 220. In addition to her perfect games, she has been deprived of 300 on her last ball on nine other occasions while recording five 299’s, two 298’s and two 297’s.

She has captured nine tournament championships, including the actual crowns in the Flint Women’s Bowling Association City Tournament in doubles, singles and all events.

Her winning 741 singles series in 1997 is a tourney record. Lena has competed for Flint eleven times in the Flint-Saginaw All-Star matches where she ranks ninth in number of games bowled and eighth in total pinfall in the event’s 39-year history.

She has captained the Flint women four times. Lena is still an active bowler and lives in the Flint area.