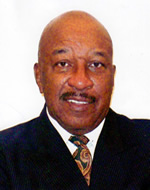 In 1959, Willie Earnest Dent, along with his brother and sisters, moved to Flint, Michigan from Merigold, Mississippi after the death of his parents, and were raised by their older sister Queen E. Shipps. As youngsters growing up in Flint, Willia and his brother Arthur began to stay after school at Northern and got involved in sports to avoid bullies they came in contact with after school every day.

Willie and Arthur decided to join the track team after being asked to by Coach Badar. Willie competed in track, football and wrestling, and lettered in all three sports.

On Northern’s wrestling team Willie wrestled in the 164 and 180 pound weight classes. In football he played the positions of offensive and defensive left end of Northern’s undefeated team. As a track team participant Willie ran on all of the relay teams. He ran the hurdles, long jump and high jump, and was the Flint Canusa Games decathlon champion.

Willie attended college at Lincoln University of Missouri, where he continued to compete in football and track. He was a member of the All-M.I.A.A. Conference Team and Honorable Mention All-American Halfback. Willie set a record in yardage in the first half of a game with 243 yards (which made Jet Magazine).

In track and field at Lincoln University Willie competed on all relay teams, competing against some of the world’s finest athletes. In 1964 in St. Louis, Missouri, Willie competed in the decathlon to participate in the Olympic trials and came in third place.

After graduating college with a BS in Education and a minor in Psychology and Physical Education, Willie began his brief professional career in football which ended due to injury.

Before retirement Willie was a sales consultant with a well-known insurance company and was noted in Ebony Magazine as one of the top sales instructors and managers.

Following Willie’s career in the insurance business he was the Executive Director for the National Urban League and the Department of Labor for the States of Illinois and Missouri for minority businesses. He then started his own business, PDQ Corporation and Home Builders and Associates. The corporation wasalso involved in the import and export business with the Lagos, Nigerian Government. Willie was also a business lobbyist with the U.S. Chamber of Commerce with the States of Illinois and Missouri.

In 1968, Willie and Mr. Bill Monroe founded the Thurgood Marshall Charter School in St. Louis, Missouri, grades K-9 and funded by the government.

Presently, Willie is semiretired working with his own travel business, and doing consulting with the Dallas Public School System, encouraging children to stay in school.

Willie is a life member of Alpha Phi Alpha fraternity and currently resides in Dallas, Texas.