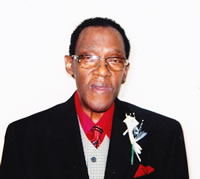 David was born in Fayetteville, North Carolina and raised in Brooklyn, New York. He moved to Flint in 1968 and was hired by the Beecher School District. David’s first job was a teacher at Marion Harrow Elementary School. Dave went from elementary to Dolan Jr. High as a science and physical education teacher, along with coaching nith-grade football and basketball.

Between 1980 and 1987 David was named Big Nine Coach of the Year five times and Class B Coach of the Year three times. During his coaching career many of his players were awarded scholarships to attend college and continue their athletic skills in basketball.

David said Marie Williams was probably his best player. She was three times Class B All State, first team captain of all her three seasons, Beecher’s all-time leading scorerwith 1,452 points, USA Today All American, Detroit Free Press Athlete of the Year and a finalist for the 1987 Miss Basketball.

David is retired and lives with his wife in Beaufort, North Carolina.