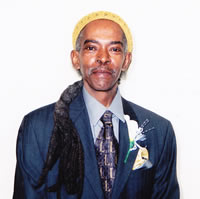 Jacky grew up on Flint’s north side and attended Garfield Elementary and Emerson Jr. High. Jacky attended Lake Fenton High School, where he was one of three African American students in the school in the late 1960’s.

Jacky began his martial arts training in 1973, trained with his first instructor Master Robert Anderson from 1973-1976 when he received his first black belt. Jacky immediately began training under Grand Master Jae Joon Kim of the World Moo Do Kwan Tang Soo Do Association.

Jacky stayed with Master Kim until 1980 after receiving his second degree black belt.

Besides teaching karate, Jacky and his wife Dora are introducing the art of farming. In 2006 Jacky and his wife started a farming program by securing vacant lots in the Beecher community where they have constructed a greenhouse across the street from the karate school.

Jacky said the gardening program is youth oriented, but is open to anyone interested. What is better than eating something from God’s earth that you have helped to produce?