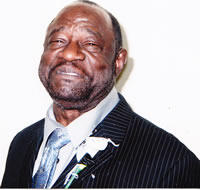 When Tommy came to Flint, he attended Emerson Jr. High and graduated from Flint Northern High.

At Northern Tommy played football under coach Fred Crawford. He wasa two way starter and most rival coaches said Hamlett was the most underrated player on Flint Northern’s football team. Tommy played in the backfield with William Wallace and Don Grigsby. In one game on defense he was credited with 15 unassisted tackles, seven assists and one blocked punt which added to a pretty good night’s work.

In college Tommy was a member of the only undefeated team in Ferris State football history with a record of 7-0-1.

In the 198 season as a freshman, Tommy led the undefeated team in rushing with 952 total yards on 193 carries (4.9 average), and scored 11 touchdowns. His longest run was 61 yards. He led the team in scoring with 66 points and was named the team’s most vaulable player for the 1968 season.

Tommy made Honorable Mention All American Selection NAIA Level in 1968.

He is currently ranked sixth in Ferris State history in rushing with a total of 2,313 rushing yards on 457 carries and 18 touchdowns – an averaged of 5.1.

Tommy makes his home in Nevada.