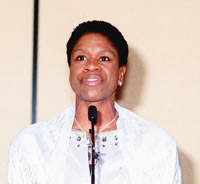 Tracy grew up on Flint’s north side and attended Hamady Elementary, Hamady Jr. High abnd Hamady Senior High School. After graduating from high school, Tracy attended Grand Valley State University from 1982-1986, where she graduated with a Bachelor of Science degree in Criminal Justice.

The Byrd family has a rich history in the Flint community. Tracy has added to that history with all of her accomplishments in sports.

In basketball at Hamady High, Tracy made honorable mention All State and Genesee Eight Conference First Team All Conference.

Tracy lives in Las Vegas where she is a detective for the Clark County School District Police Department.