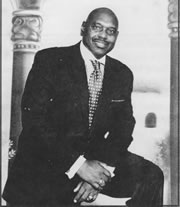 Melford attended Stewart Elementary School, Whittier Jr. High and graduated from Flint Southwestern Academy. In 1971 Melford played on both sides of the ball for Flint Southwestern’s football team as an offensive and defensive tackle. HE was also co-captain of the team.

The 1971 team earned the honors of being City champions, Saginaw Valley champions and was ranked No. 6 in the state. Melford was named first-team All City, first team All Conference, first team All State (unanimously) abnd nade the scouting systems of America All-American Award.

Melford received a football scholarship at Miami University, Ohio, from 1972-1975. In 1975, at defensive end, Melford made 1st Team All-MAC (unanimously). He was runner up defensive player of the year in the MAC. He received Miami Univeristy’s most valuable player award on defense in 1975, along with the quarterback sack award (19).

He ranked No. 3 at Miami University with five fumble recoveries; one blocked punt; 109 tackles for loss; was a member of three consecutive MAC and Tangerine Bowl championship teams with a 1973-1975 team record 32-1; and ranked 10th, 15th, and 12th in the nation (AP and UPI).

On April 11, 2013 Melford was presented with Talawanda’s Educator of the Year award.