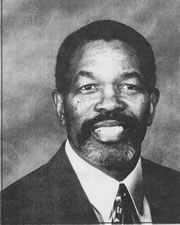 Monroe attended Dorrt Elementary School, Emerson Jr. High and graduated from Flint Northern High School. He was named the most valuable basketball player for Flint Northern in his senior year. He was the top scorer with a 17.9 average in 15 games and was the team’s top rebounder.

In track and field, Monroe was one of coach Norb Badar’s top runners. In the indoor track meet at Mount Pleasant, Monroe scored 10 points before the meet was even “minutes” in progress. He won the long jump with a leap of 22.3 feet; won the high hurdles; took second place in the low hurdles; and was on the six lap relay team that took third place. In the city meet Monroe wonp the 110 high hurdles with a time of 15.5.

In football, Monroe was primarily a blocker, yet half of the eight passes that were grabbed went for touchdowns and the longest of four was 55 yeards speared by Monroe for six points against Arthur Hill High.

Monroe played basketball for Flint Junior College and had a 17.4 scoring average and a .405 shooting average. He was the Bears top defender. Monroe led the Bears on the boards in every game including a high of 17 grabs. At Dearborn, Monroe was the best foul shooter, making 17 of 26 free throws at a 654 pace better than the 571 finish at Flint Northern High School.