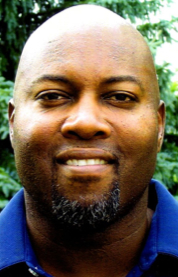 In 1985 Glen Rice was named Mr. Basketball of Michigan.

Glen played on the Wildcats team that earned a 55-1 record in two years.

That record still ranks as the best two-year record in the state.

Coach Grover Kirkland said the 1985 basketball team which Glen played on was probably one of the best ever to come out of Flint.

In 1988-89 Glen set a record in the NCAA tournament game hitting 39 points vs. Florida.

Glen set a NCAA Tournament record scoring 184 points in six games and was named the most outstanding player and All American.

Glen is the first basketball player from the Flint area to have his number retired in the University of Michigan’s basketball program (#41).

Glen played on several NBA teams. While playing for the Charlotte Hornets Glen was voted by fans, players and coaches as the best shooter in basketball (a perfect jump shot).

Glen played on the 2000 L.A. Lakers team that won the NBA Championship.