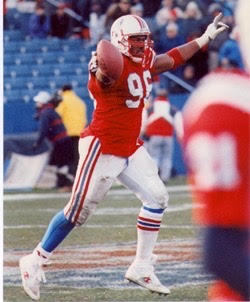 At Flint Northern High School, made all-city and all-conference athlete and graduated with honors in 1982.  In the classroom, he earned a spot on the National Honors Society as a sophomore, even though that distinction was typically granted to just juniors and seniors.

Brent’s journey led him from Flint Northern to the University of Toledo where he played football from 1982 to 1985.  As a defensive end he was a 1st Team All-MAC selection in his junior and senior seasons.

In junior season he had 84 tackles, 11 tackles for loss, two forced fumbles and one fumble recovery helping Toledo become one of the top five defenses in the country and leading them to a MAC Championship and a trip to the California Bowl in 1984.

In 1985 Brent finished senior season with 101 tackles and was a big part of Toledo defense that was ranked third nationally in total defense.  Brent graduated with a business degree and was selected by the New England Patriots in the 1986 NFL Draft.

In his rookie season he had 73 tackles and seven sacks and received 1st Team All-Rookie honors. From 1988 to 1990 he led the New England Patriots in sacks.  Brent played eight seasons with New England and finished with the 4th most sacks in the history of the Patriots franchise played for the Seattle Seahawks and the New York Jets had 45.5 sacks, 491 tackles and 12 fumble recoveries in his 11-year NFL career.

While Brent achieved greatness on the field made sure to focus on preparing for life after football taking part in the NFL Internship program and was able to use this opportunity to enter the business world as a financial advisor.  In 2014 he became the owner and director of the NextGen Football Camp which helps discover and provide exposure to high school football players across the nation. In 2016 Brent was inducted into the University of Toledo Athletic Hall of Fame.

Brent Williams you are the true definition of being “Flint Strong”! You have made Flint proud.  Welcome to the Greater Flint African American Sports Hall of Fame!