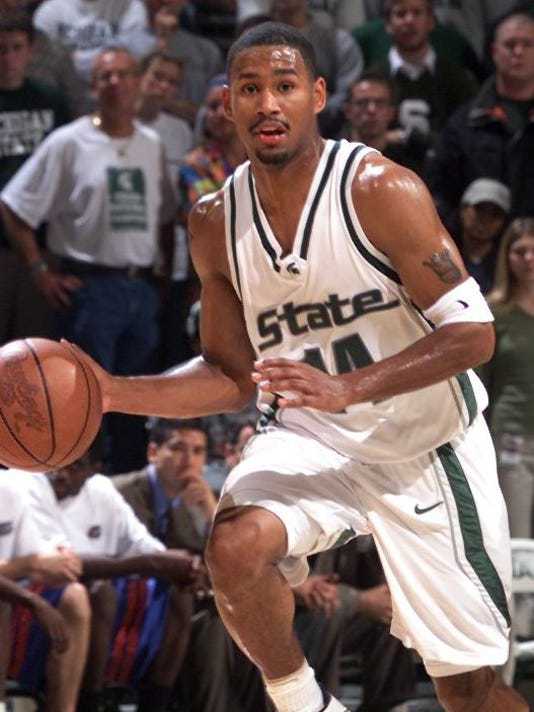 Charlie Bell’s athletic journey began in his very own backyard at his childhood home in Flint, MI where he would spend his days playing basketball.  At Flint Southwestern his love for the game of basketball continued where Bell became one of the best players in the state and in the country.  Scoring a career total of 2,252 points while at Flint Southwestern Charlie helped lead them to their first city championship since 1975.  As a high school senior Charlie Bell averaged 30.5 points per game and 13.8 rebounds per game.  Bell finished his high school career as Flint’s all-time leading scorer

As a sophomore, Bell averaged 7.8 points and 3.8 rebounds, as MSU posted a 33-5 record and advanced to the school’s first Final Four since 1979. His best scoring effort of the season was a 26-point game at Oakland.

As a junior, Bell earned third-team All-Big Ten honors, averaging 11.5 points and 4.9 rebounds.  Defensively, Bell led MSU with 47 steals. That season Charlie scored a career-best 31 points against Michigan, as MSU posted a 114-63 win. In postseason play, he averaged 7.2 points, 6.0 rebounds and 2.8 assists on the Spartans’ run to the NCAA title, while also earning a spot on the All-Final Four Team.

Bell’s senior season opened with him posting a triple-double with 13 points, 11 rebounds and 10 assists against Oakland. He joined Magic Johnson as the only Spartans to ever post a triple-double at the time.  He increased his scoring average to 13.5 points per game and scored in double figures in 24 of 33 games.  As a senior Charlie Bell earned NABC Second-Team All-America and Associated Press Third-Team All-America honors. Bell was also named a Wooden Award All-American and was First-Team All-Big Ten.

Charlie Bell went on to have a long and successful professional basketball career playing in Italy and Spain where he was an Italian League Champion and top scorer. Bell also played in the NBA for teams like the Phoenix Suns, Dallas Mavericks, Milwaukee Bucks, and Golden State Warriors over the span of several years.

Charlie Bell III you are the true definition of being “Flint Strong”! You have made Flint proud.  Welcome to the Greater Flint African American Sports Hall of Fame!