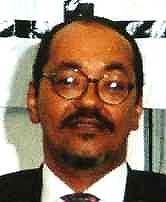 Al grew up in Flint and attended Clark and Jefferson Elementary, Bryant Jr. High and graduated from Flint Northern.

When Al was in Junior High, his father, Al Washington Sr. put a high jump pit in his back yard where Al practiced after school.

Al Sr. was able to get members of Northern’s track team to help Al Jr. broaden his high jumping skills.

As a result of Al’s hard work and determination, he was able to achieve his goal, and became one of the greatest high jumpers ever to come out of the Flint area.

He was three times state champion in the high jump under coach Norbert (Norb) Badar and Fred Crawford.

In the city track meet, Al jumped 6 feet 6 inches to equal the all time prep record. He established a field record at Ypsilanti’s dual meet with a jump of 6 feet 5 3/4 inches, breaking the old record of 6 feet 4 3/4 inches. Al was defeated only one time in three years of high school high jump competition.

His skills in the high jump earned him a scholarship to the University of Wyoming.

His father, Alfred Washington, Sr. was among the first group to be inducted into the GFAASHOF in 1985. He would be proud that Al Jr. is among the 2000 group of inductees.

Al resides in Flint and is well known for his paintings, as his father was.