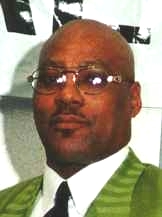 Melvin came to Flint at the age of nine. He attended Jefferson Elementary, Bryant Jr. High, graduated from Flint Central and received a scholarship from the University of Wyoming.

While at Flint Central, Melvin was among the few athletes to earn nine letters in three sports…football, basketball and track. He was captain or co-captain in all three sports and MVP in football and basketball.

As a basketball player, Melvin did not have a fancy jump shot and he seldom took a shot, however, when the whistle blew he became the Rock of Gibraltar. He would out rebound players four to five inches taller than himself to help his team get the job done.

At the time Melvin played football, Coach Bob Leach and Tim Bograkos said Melvin was the strongest lineman they had ever coached. He was compared to the Greater Flint Afro-American Hall of Famer, Joe Quarles, a 1954 All State end. Coach Bob Leach said “Mel is a real nice person out of uniform, but in uniform he had a football meanness that was an attribute. He loved contact and my-oh-my how he could block.”

One of Melvin’s more memorable basketball games was when in the last 50 seconds of a game against Pontiac Central he made two free throw shots to win the game by one point…and the same night, his cousin Gene Summers made a free throw to give Flint Junior College a one point victory. The next day the sport page read “It was a hot Summer night in the bitter cold of winter.”

Melvin resides in Flint and works for General Motors.