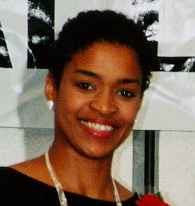 Pamela grew up in Flint, and attended Bunche Elementary, Flint Academy and graduated from Flint Northern High School. Pamela attended the University of Southern California where she excelled in sports.

While at Flint Northern, Pamela at 6 feet 3 inches, led the Lady Vikings to win back to back State Class A Basketball Championships in 1978 and 1979. She was also instrumental in leading Northern’s track team to win back to back Class A titles in 1979 and 1980 Pamela was an All Saginaw Valley Conference performer on Northern’s League Champion Volleyball team.

“I never had a problem with Pamela and Paula when it came to education, they were self-motivated and good leaders,” said their mother, Diane McGee.

Pamela and Paula served as president of their high school class, and during the three years at Northern, they compiled a record in basketball of 59 wins and 4 losses.

While attending the University of Southern California, their team was classified by basketball experts as being the most dominant in women’s basketbal history.

As student athletes, Pamela and Paula, received numerous awards and back to back National Championships at the University of Southern California.

Pamela played in the WNBA last year and now lives in Englewood, California