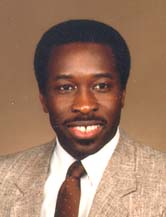 George and his family moved to Flint when he was 13 years of age. He attended Lowell Junior High, Flint Central and went on to graduate from the University of Michigan, where he excelled in football and track.

While a student in high school, George participated in football and track. In football his senior year, he gained 410 yards rushing in 71 carries with a total of 66 points for the Saginaw Valley scoring crown. He was named most valuable girder by his teammates and was named to the Detroit News All Star Football Team in 1964. George earned a slot on the Class A All State Eleven along with his teammate Tiny Laster.

On the track team in high school, George won the 60 yard dash at the Central Michigan Relays Invitational indoor meet with a time of 6.3 and ran a 21.9/220 on the 880 yard relay team with a record time of 129.6 in the city meet.

He was All State in track at the 1965 Michigan High School Class A Track Meet.

As a football player at the University of Michigan, George was All Big Ten Defensive Back. In 1967, he was drafted in the 14th round by the Detroit Lions. George played six years in the NFL (St. Louis, New England, San Diego and New York Jets). He set a NFL and club record with six kick off returns for 206 yards, one for 103 yards and touchdown (St. Louis vs. Philadelphia).

George lives in Colorado and works at the University of Colorado.