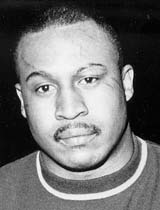 James (also known as Baby James) grew up on the north side of Flint in the St. John Street neighborhood. He attended Fairview Elementary, Lowell Junior High and Flint Central High School.

James began his boxing career under the guidance of the late Dee Cavette and Floyd Fielder at the old Flint Interracial Community Center (FICC) on St. John Street.

He was one of the best heavyweights during his time to come out of Flint. He had the skills of a Sugar Ray Robinson with a knock out punch. In 1960 he won both City and State Novice Middleweight Titles. He won the open heavyweight title in Grand Rapids, Michigan in 1962.

When James entered the United Stated Marines he polished his skills as a boxer, and went on to win all service championships. In four years in the United States Marines, he had a record of 49 wins and one loss.

In 1963, while on leave, James won the Flint Golden Gloves finals in the heavyweight division with a KO. It was booked as the fight of the night, James Parker vs. the A-Bomb.

James won the light heavyweight quarter finals National Golden Gloves held in Kansas City, and gained the officials nod as the National Tournament’s most outstanding fighter (at that time).

James is retired and resides in Flint.