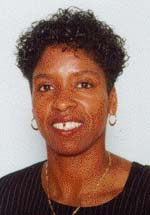 Laurie began her childhood on the north side of Flint and attended King Elementary. Her family later moved to the Hamady school district where she completed her education at Hamady Junior High and Hamady High School.

Laurie’s athletic ability enabled her to excel in any sport she played. Her sports history began at Hamady High School where in four years she compiled records in basketball, volleyball and track.

Laurie made the Mid Eastern Eight Conference, All League Girls Basketball squad her last three years of high school. She holds a Hamady High record of 41 points scored in one basketball game. She was also team captain two consecutive years. She was named to the County All Conference Basketball Team and All State Team, averaging 28 points per game. She scored over 1000 points.

Laurie was named to the high school Class B Volleyball All Star Team. In track she won the 110 high hurdles at the county’s girls track meet two consecutive years with a time of 16.2.

While at Eastern Michigan University as a freshman, she won MVP and set five team records including most points scored in a season (355), most assist in one season (81), single game scoring record (32), and most accurate shooter hitting 45% from the field.

Laurie was voted one of the tri captains on the Eastern Michigan University basketball team, and named Athlete of the Year.

In Switzerland she lead the league in scoring 45 points per game, with a single game high of 69 points. Because of this achievement, Laurie was named “Golden Hands” by sports writers. The Italy Como Basketball Club called her “Little Player by the Sea” where her average was 25.0 points per game. While playing with the Spain Donasti Basketball Club she averaged 25.6 points per game. She was voted MVP player at the Spanish Invitational.

Sweden’s Second League Championship, Division One, voted Laurie best guard. Also in Sweden she was voted MVP in the All Star game. In the American Basketball League, San Jose Lasers, Laurie was voted MVP. The Atlanta Glory voted Laurie Unsung Hero in 1996-98. Laurie had the distinction of being the oldest player in the ABL Women Basketball League. She led the league in scoring with 23.4 points per game. She was a unanimous pick on the WBL All Star Team. Laurie was the AAU Detroit Cobras All American from 1982 to 1987, Cobra runner up champions 1982-1991, AAU Champions 1992 to 1997 and MVP 1985, 1990, 1992, 1996 and 1997.

Laurie was assistant coach to the Lady Vikings that won the City, Valley, Regionals and State Championship in 1994 at Flint Northern High. She is currently coaching at the University of Detroit.