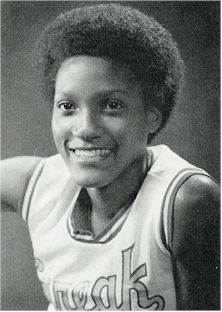 Linnell grew up on the north side of Flint. She attended Jefferson Elementary, Bryant Junior High and Graduated from Flint Northwestern High School.

Linnell was hailed as a super star in the 1974 Olympian Games. She was the top individual performer in the Champion of Champions Track Meet at Lake Ville, setting three records. She was chosen three times All City, All Saginaw Valley and All State in track.

Linnell was the first girl to play on the boys junior high basketball team at Bryant Junior High. With that accomplishment she gained state-wide attention.

In her three years at Northwestern, Linnell was one of the most outstanding athletes in Genesee County, ranking with the best in track and on the hardwood. She was named Most Valuable Player on her high school team.

In college she was best player as a freshman in the GLIAC at Ferris State and after six games, Linnell zoomed to the top with a 21.8 scoring average and a 12.4 rebounding average. She was given honorable mention by the World Basketball Leagues National Scouting Association. She made All American at Kentucky State University and made the final cut for the 1980 U. S. Olympics. She was also given honorable mention by the NAWS Selection Committee.

Linnell averaged 12 points and 13 rebounds and led her team with 108 steals. She was selected number four in the Women’s Professional Basketball League and drafted by the St. Louis Streaks.

Linnell was the first of 15 Americans chosen for the European Professional League. She played in the European Professional League for five and a hal years in Rome, Italy. Linnell was Most Valuable Player three times, and an All Star five times, named best player in Europe and held a scoring record of 84 points in one game. Linnell also played on the Italian National Basketball Team in Japan.

Linnell and her family reside in Flint where she operates the Linnell Jone McKenney Basketball Camp.