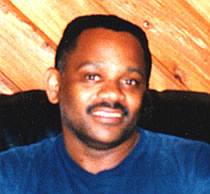 Keith grew up on Flint’s north side and attended Martin and Civic Park Elementary schools. He went to Emerson and Emerson Intermediate Middle school. After graduating from Flint Northern, he attended the University of Tennessee where he was an All American in track and field for four years.

Keith attended the University of Tennessee and anchored Tennessee’s winning indoor National championship distance medley relay team in 1979 with a time of 4: 03.7. At the 1980 NCAA indoor championship held at Joe Lewis Arena (11 laps to a mile), Keith anchored the second place Tennessee distance medley squad with a personal best time of 4:01.7 mile run. His finest collegiate 880 run was 1:41.7. In 1980, Keith’s running earned him Athlete of the Decade.

Keith lives in Flint and works for the State of Michigan as a Departmental Analyst in the Juvenile Justice System.