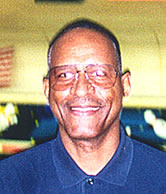 While attending Southwestern Michael played football, basketball and was on the track team.

After graduation Michael served in the United States Army from 1965-1967. In 1966 while serving in Korea Michael played on the second All Army Team as a wide receiver. After his discharge from .the Army he played with the Flint Wildcats semi-pro team as a wide receiver.
.
In 1976 and 1977, Michael was the scoring champion for the Police Basketball League averaging 30 points per game.

Michael’s claim to fame is his bowling talents. From 1999-2003 Michael was on the senior All Star bowling team six times. ”

Michael and his family live in Flint. After 35 years as a police officer, he is now working for the Bishop Airport Authority as a security officer.