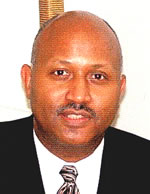 Parent: Oscar Britt (father)
Wife: Dinah
Daughters: Raven, Desirae, Tia, Ean, Ariel
Sons: Eric, Ron
Wayman arrived in Flint as a sophomore at Flint Northern and after graduating from Northern, he received a basketball scholarship to the University of Michigan.

While at Flint Northern Wayman was the teams top all around player at 6’1 “, with a 16.6 average and was the top rebounded under coach Bill Frieder. Wayman played on two back to back city championship teams and two state championship teams with a 25-0 season.

In 1971 and 1972 Wayman was a unanimous selection on the All Saginaw Valley conference first team. In the game against Saginaw Arthur Hill, Wayman had the top individual effort scoring 24 points. When Wayman received his scholarship to the University of Michigan, his team mate Terry Furlow received a scholarship to Michigan State. Wayman was known for his defensive skills and Terry was known for his offensive scoring. This was the start of a new rivalry between the two.

He served as team captain leading his team to second place in the NCAA tournament finals. At 6 feet 2 inches, Wayman was one of the shortest men ever to play forward for the Wolverines in the modern era. Coach Johnny Orr said “Wayman was the most underrated player in the country.” In 1976 Wayman was drafted by the L.A. Lakers in the fourth round #60.

Wayman and his family live in Grand Rapids, Michigan.