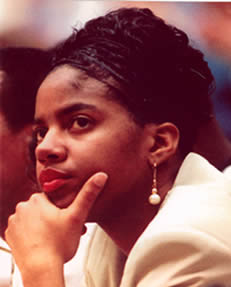 Tonya grew up on Flint’s north side and attended Pierson Elementary, Bryant Jr. High and graduated from Northwestern. While attending Northwestern Tonya excelled in basketball.

As a stand out at Northwestern, Tonya received the title of most valuable player and was the only under class player chosen to the 1983 All Saginaw Valley Conference girl’s basketball team. She was a unanimous choice for All Valley after guiding Northwestern to a perfect 10-0 league record and leading the Lady Wildcats to the ultimate goal of State Class A Champions.

Tonya played on two state high school championship teams-1983-1984. She was All City, All Valley, two times All State and named to the high school girl’s All American Team.

In 1984, Tonya along with Anthony Hamm received the first scholarship award from the Greater Flint Afro-American Hall of Fame for their academic and athletic talents.

Tonya received a basketball scholarship to attend the University of Tennessee. She was a participant in the 1986 Junior National Sports Festival and in 1987 Tonya was most valuable player in the NCAA women’s tournament. She was All Star player in the international basketball tournament for women in Taipei the Republic of China in 1987 and 1988. Tonya was a member of the IX Kodak Women’s Basketball Team in 1990. She played in the WNBA Basketball League from 1999-2003 and was a member of the WNBA All Star Team in 1999. Tonya played professional basketball in Italy, Israel and Turkey.

Tonya was Flint Northwestern high school girl’s basketball coach from 1991-1994. She holds the title of winning a state championship as a coach and winning a state championship as a player at Northwestern. Tonya’s team was featured on ESPN inside the lines and she was named coach of the year that same season. In 1990 to 1992 Tonya was assistant coach basketball coach at Mott Community College. In 1998 she was ABL Interim head coach for the Columbus Quest.

In 2004 Tonya was a radio color commentator for the Phoenix Mercury (WNBA). Tonya lives in Westerville, Ohio and is an assistant basketball coach in the NWBL.

Tonya you have made Flint proud, this is truly your night.