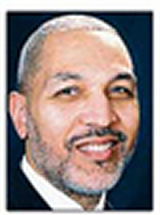 Arnold was born and raised on the southside of Flint. He attended Scott Elementary, McKinley Junior High and graduated from Flint Central High School. While at Flint Central, Arnold was a three-year starter.

In his college years at Southern University, Baton Rouge, Louisiana (1979-1983), he was on the first black college team to be awarded an automatic bid to the NCAA tournament in 1981. In his junior year, he was captain and second team all SWAC. In his senior year, he was captain and all SWAC, played in LABC All Star Game, Louisiana vs. Mississippi All Star and the Sunbelt Classic.