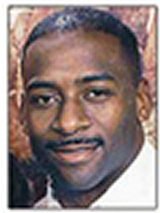 There must be something magic about the name “Carpenter.” Brian Carpenter is the third recipient of Hall of Fame honor along with his late father Sam and late brother Alden (Butch).

Brian was raised on the southside of Flint, attending Scott Elementary, Whittier Junior High and Flint Southwestern and graduating from the University of Michigan, Ann Arbor.

Brian ran for 310 yards on 16 pass receptions and was best in the city. He had six touchdown passes, six interceptions and in 1977 the Flint Journal named him the best.

During his college years, his football position was CB/DB.

Brian’s professional football career began as a defensive back for three years in the NFL from 1982-1984. He was drafted in the fourth round by the Dallas Cowboys and traded to the New York Giants. In 1983 he played for the Washington Redskins and played in the Super Bowl. He also played for the Buffalo Bills.

Brian proved that with hard work and determination, you did not have to be a giant in stature, only a giant in your heart.