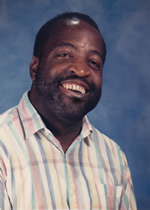 In 1980, George became head coach for the Flint Northern girls track team. During his tenure at Flint Northern, his track team dominance was considered a dynasty. He had undefeated dual meet seasons from 1978 through 1983, winning 99 consecutive meets and in 41 of those meets the team scored over 100 points.

George continued coaching at Flint Northern through 1987. This year marks the 10th year of George’s passing. His wife Alison lives in the Flint area.