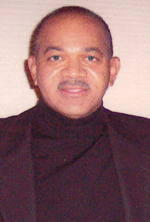 Jason was raised on the south side of Flint and graduated from Southwestern High School in 1966.

In the 1966 regional track meet, Jason placed second in high jump and high hurdles, and third in the low hurdles.

He was the man most responsible for Southwestern’s State Championship in track and field by accounting for 12 points. Jason was second in the long jump with a leap of 22 feet 11 1/4 inches and fourth in the high hurdles.

He was on the Southwestern track team that won six championships his senior year. Jason also participated on the basketball and football teams.

He placed second in the triple jump and his best effort broke the meet record.

Jason was named winner of the Harold Webster Trophy for his performance in leading the Flint adult track team to victory. He set records in the triple jump and discus and equaled the high hurdles record.

He broke the triple jump record in three straight tries with a 43.0 effort. His discus mark stands at 111 feet and his 14.8 for the high hurdles tied a mark held by former state champion Ernie Long.

Jason attended Flint Junior College and the University of Michigan. He lived in Flint for 26 years and moved to Detroit, where he now resides.