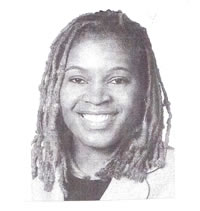 Coquese grew up on Flint’s south side and attended Walker Elementary, Whittier Middle School and was an outstanding basketball player at Flint Central High School. Coquese had back to back All State honors in basketball for Central and was a four year starting ppint guard, leading the Indians to their first Saginaw Valley Championship.

In Coquese’s second year she set a school record with a total of 373 points. She attended Notre Dame from 1990-1993 and was a two time All Midwestern Collegiate Conference pick, and led the Irish to three league titles.

On the court Coquese led the Notre Dame basketball team in steals in all four seasons and was first on Notre Dame’s all time steals per game list (2.7), second in career steals (307), fifth in assists (554), tenth in three points made (82) and tenth in minutes per game (27.6).

In Coquese’s professional career she played in the WNBA from 1999-2003. She played for Portland, New York, Washington and Houston. Coquese played seven seasons with four teams in two leagues, helping the Houston Comets to the 2000 WNBA Championship, and becoming the first player in league history to lead three teams to the postseason.

Coquese used her law degree to help create the WNBA Players Association and served as its founding president from 1999-2001.

After playing in the WNBA she started her coaching career at Notre Dame where she coached under coach Muffet McGraw for eight years.