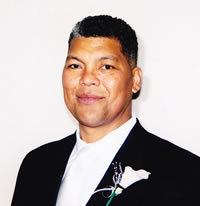 Eugene grew up on Flint’s north side and attended Garfield Elementary, Emerson Jr. High and Flint Northern High. Eugene played on Flint Northern’s football team and in his senior year made All City and All Saginaw Valley first teams. Eugene was named one of the football team captains along with Michael Miller, Bob Howlett and Lynn Miller.

Eugene was drafted by the Buffalo Bills in the third round (59 overall) of the 1982 NFL draft.

He played twelve years in the NFL as a linebacker. From 1982-1988 Eugene played for the Buffalo Bills. From 1989-1991 he played for the Tampa Bay Buccaneers. In 1992 Eugene retired from the San Diego Chargers.

On September 9, 2010, Eugene was inducted into the Saginaw Valley State University Athletic Hall of Fame.

He lives in Tampa, Florida. However, Flint is still home.