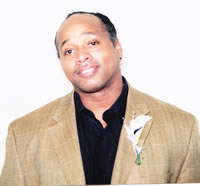 Fred grew up on Flint’s north side and attended Dailey Elementary and Dolen Jr. High in the Beecher area.

After leaving Dolan Jr. High, Fred attended Flint Northwestern where he was known for his wrestling and weight lifting.

At age 16, Fred finished fourth at the teenage nationals and set his first major record with a 451 pound dead lift. At 17 he won the state high school teenage State of Michigan seniors at 123 pounds. He held the state records as a teenager in five weight classes plus two-time world champion.

In 1983, an increase in body weight moved Fred up to the 132 pound division, where he came close to breaking Lamar Gant’s dead lift record.

In 1986 Fred moved to the middleweight division. At a meet in Michigan he ripped up 700 pounds and had 720 pounds half way up, easily winning and taking best lifter. This ranked Fred secodn to John Inzer, the best middleweight dead lifter in the world that year.

Fred is in the Michigan Hall of Fame along with Greater Flint Afro-American Hall-of-Famer Lamer Gant. Fred’s records that stand in the State of Michigan include:
451 pound dead lift(114 pound class)
615 dead lift (148 pound class)
Squat 661 pound dead lift
700 pound total of 1719 (all at 165 pounds)

Fred won the middleweight world title by outlifting Nevil Primich. He has made his mark in the world of power lifting by winning the YMCA Nationals, defeating formerworld champion Bob Wahl, 1642 to 1625.