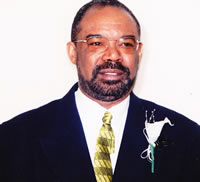 Warren grew up on Flint’s south side and attended Scott Elementary, Whittier Jr. High and graduated from Flint Central High School. He earned a scholarship to run track at the University of Michigan. In 1980 he was named tri-captain of the track team.

While in high school at Flint Central, Teddy set a school record in the 440 yard dash. In 1976 he represented the Indian Express Tracj Club at the U.S. Track and Field Indoor Meet in Ann Arbor, Michigan. At that meet, Teddy won the pole vault with a jump of 14 feet and ran a leg on the winning mile relay team with a time of 3:25.8, which was the third fastest time by a prep school ever recorded in the state.

In 1980 Teddy qualified for the NCAA track finals as a member of the distance relay team, taking third place. Carl Lewis of Huston was also one of the athletes to qualify for the NCAA finals that same year.

In the 1978 CANUSA Games, in the adult division, were such names as Teddy Dobson, Michael Miller, Daryl Dismond and Ken Brown who also set individual records. Flint won 42 of 60 track events and a 27 to 8 edge in field events.