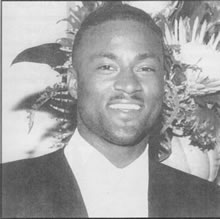 Andre grew up on Flint’s north side and attended Gundry Elementary, Bryant Middle School and graduated from Flint Northwestern High School. In high school Andre was a three-sports star in football, basketball and track and field. In basketball, Andre was slected twice to the All-State team after helping the Wildcats win back-to-back Class A state titles in 1984 and 1985, while compiling a 74-3 record during his three year career.

In track Andre made All-City in the long jump.

Andre attended Michigan Stae University and became an All-American leading the Spartans to the 1988 Rose Bowl championship. Andre set career records for receptions and receiving yards, and was named to the All-Big Ten teams in 1986 and 1988. At MSU, Andre played three sports – football, basketball and track. Andre was picked 22nd overall in the 1989 NFL Draft by the Indianapolis Colts.

Andre is one of the few players that hold the distinction of winning a Super Bowl in the USA and a Grey Cup in the Canadian Football League.