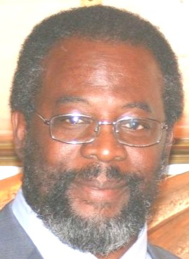 At Flint Central, George played three different sports: football, wrestling and track and field. George was All State in football, state champion in wrestling and took 2nd place in the shot put in the state finals.

George went on to college at the University of Minnesota. George made the All Big Ten Second Team for football in 1976 along with Tony Dungy and Ron Kullas, and led the Big Ten in tackles.

George’s professional career consisted of a short stint with the Pittsburgh Steelers as a free agent.